If your phone is slow after snoozing, Wakelock Revamp might be for you! 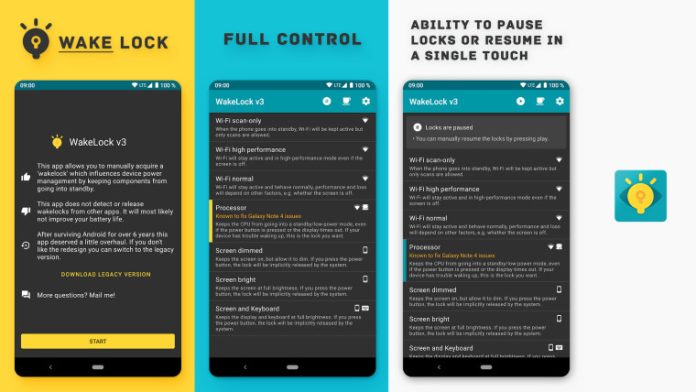 It’s no secret that I don’t like my Nokia 3.4. It’s the most laggy phone I’ve ever had, especially when I come to use it for the first time after an hour or so. A few days ago, I put DreamLab back on my phone to help science and found when I woke up that the phone looked a little more squishy than usual – this was because the CPU was active and the phone didn’t go into deep sleep to conserve juice.

After a bit of Googling, I discovered wakelocks that keep the processor active. You can enable these wakelocks using an app like Wakelock Revamp to keep the CPU active while the display is off, when you go to use your phone it doesn’t take ages to wake up but is instant and ready to roll.

Before I found Wakelock Revamp, I tried a pretty similar app but it didn’t offer a run-on-start feature and having to wakelock every time seemed like it could be annoying. As such, I switched to Wakelock Revamp which offers a launch option. With Wakelock in place, it turns out the phone really isn’t slow after all. 3GB of RAM is a bit prohibitive when it comes to heavier apps, but opening the phone and getting started is nice and fast now.

One question you’re probably wondering about is whether not letting the processor go into deep sleep is draining the battery. From my testing, this does not appear to be the case. In the battery usage section of the settings, I can see the phone in idle mode and Wakelock v3 listed, and both have drained 1% of the battery – not too much when you compare that to the screen which used 5%, the standby for the mobile network I had used 3% and the browser My main internet responsible for draining 2% of the battery. It’s been nine hours since I unplugged the phone, I’m down to 75% and there’s another day and 4 hours projected until it drains.

It’s not clear how common the issue of severe lag after unlocking an Android phone is, I personally haven’t experienced it on other devices but many Nokia 3.4 users have complained online about poor performance and the Wakelock Revamp app mentions the Galaxy Note 4 by name as having issues. If you notice any issues with your device, I highly recommend this app to give your phone a little boost.

A few other things I like about this app are the lack of ads so it works very well, and it doesn’t require you to mess with permissions or disable battery optimization. I can’t guarantee it won’t affect your device’s battery life while it’s running, but in my use of the app, it didn’t have a noticeable effect.

If you want to download it, just go to The Google Store and click the download button. It has had over 100,000 downloads and has a 4.8 star rating. It works on devices running Android 4.1 or higher, so it will probably be compatible with your device. I only had to enable CPU Wakelock, but there are a few other options as well, including Wi-Fi only scanning, Wi-Fi High Performance, Wi-Fi Standard, Dim Screen, Bright Screen, and Screen and Keyboard. Each of these options comes with a small description of what they do and if you want the app to run initially, just go to the settings cog and turn the feature on.

Please let us know in the comments what device you have and if it suffers from any wake lag and if you were able to fix the problem with Wakelock Revamp.