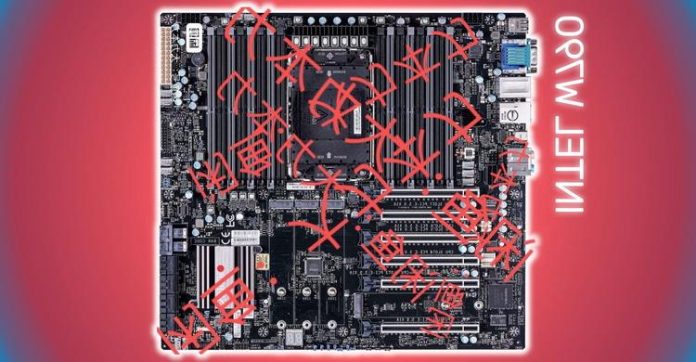 The first images of the motherboard created with the Intel W790 chipset for high-end Intel HEDT processors of the new generation appeared on the web. The new SuperMicro X13SWA-TF is equipped with an LGA 4677 processor socket and can build workstations, created on a Sapphire Rapids-WS chip, which is being presented in two Series Xeon W-3400 and Xeon W-2400.

After a massive leak in late December, Intel was able to publish a series of Xeon W-3400 processors with a number of cores 12 to 56 and 24 to 112 virtual threads, and a Xeon W-2400 with a number of cores 6 to 24, and the thy 48 virtual threads. For the first time in an expensive processor, which includes models with TDP between 220 and 350 W, and then the second-generation of a processor, which will provide the second generation with power of 110 to 225 W.

Out of the leaks of the upcoming SuperMicro X13SWA-TF motherboard, its technical specifications have also become known. For example, it’s coming up with support for the 56-core Sapphire Rapids-WS, and will allow the use of up to 2 TB of eight-channel DDR5-4800 and DDR5-4400 RDIMM 3DS.

The board is made in a form factor E-ATX. She received one primary power connector with 24-pin EPS, and three 8-pin EPS connectors for powering the processor. This novelty is complete with an audiocodec, multiple USB connectors, SATA ports and 4 M.2 slots for NVMe drives with PCIe 5.0 interface. This theoretically, based on the SuperMicro X13SWA-TF, you can develop a high-performance workstation with games to play.

If you notice that the error is correct, use the mouse to select and press CTRL + ENTER.